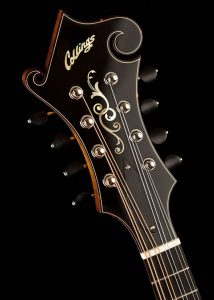 Bill Collings moved from Ohio to Houston, Texas in the mid-1970s. More interested in guitars and engineering than in medical school, he took a job at a machine shop and began building guitars on his kitchen table with just a few hand tools. Coming from a family of engineers, Bill’s experience as a craftsman and his natural curiosity equipped him to experiment and quickly improve his craft. Before long his instruments were in the hands of local talents Rick Gordon and Lyle Lovett, which led more Texas players to seek out Bill for custom guitars. After building about fifty guitars and a few banjos in Houston, he headed west to pursue lutherie in southern California. Along the way, he befriended Austin luthiers Tom Ellis and Mike Stevens. Having found like-minded instrument makers, Bill decided to stay and share space in Tom’s shop. By the mid-1980s, Bill was building flattop and archtop acoustic guitars in his own small shop. His reputation for outstanding quality and meticulous attention to detail quickly spread. In 1989, he rented a 1,000-square-foot space and hired two helpers.

That same year, George Gruhn, the acclaimed collector and purveyor of vintage fretted instruments and owner of Gruhn Guitars in Nashville, asked Bill to make 24 custom “Gruhn” guitars, giving the Austin luthier national exposure. In the spring of 1992, Bill moved his guitar-making operation into a 3,200-square-foot feed store he purchased on the outskirts of Austin. By this time musicians such as Pete Townshend, Joni Mitchell and Brian May were playing Collings instruments and demand con 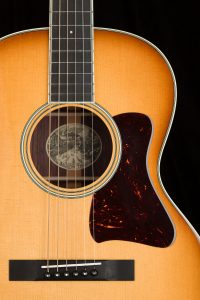 tinued to grow. The existing shop tripled in size and its staff increased to 50 full-time employees. By 2005, Bill broke ground for a new 27,000-square-foot shop featuring CNC technology that modernized machining processes and made parts production more consistent, accurate and safe. As the business grew and processes were refined, one thing remained the same: Bill Collings’ commitment to build the finest stringed instruments available.

Fueled by his fascination with the construction and design of a variety of instruments, Bill soon began crafting more than just acoustic guitars. In 1999, he introduced the first Collings mandolins, which like his guitars, quickly set new standards for the industry. In 2006 his interest in carved top instruments led him to introduce a line of electric  guitars that players quickly embraced because of the instruments’ exceptional craftsmanship and tone.In 2009, with a nod to the tradition of some other high-end acoustic guitar makers, Bill created a line of concert and tenor ukuleles that have been hugely popular with professional and hobbyist players alike.

In late 2014, Collings started production of Waterloo Guitars, a stand-alone line of vintage-inspired guitars designed to capture the tone and character of some of the best depression era instruments.

For the past 40 years, Collings Guitars have been the choice of musicians who seek the finest handmade instruments available. You owe it to yourself to try a Collings.