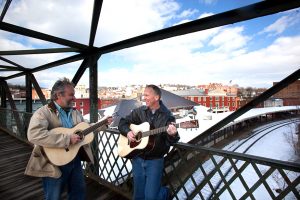 Huss and Dalton Guitar Company, Inc. took root in the fertile soil of the Shenandoah Valley, late in the summer of 1995, when Jeff Huss and Mark Dalton’s friendship and mutual interests inspired them to envision eminently playable, mellifluous, and attractive guitars that were true to their sense of aesthetics and tone. While the luthiers appreciated traditional design, they imagined a guitar that paid homage to tradition and also incorporated improvements to the structure and cosmetics of the distinctly American steel-string guitar.

Jeff Huss left North Dakota for Virginia, in 1984, to pursue his interest in bluegrass and traditional music. It was this interest and a Staunton law firm’s decision to purchase a computer that led him to Stelling Banjo Works where, for nine years, he honed his skills as an instrument maker. While Huss was still working for Stelling, he began building guitars in his home shop.

Native Virginian and equine aficionado Mark Dalton grew up in the South Central part of the state, where his family always enjoyed traditional music in the home and community. He began playing guitar at age 13 and banjo by 18. At a jam session in the early ’90s, he met Jeff Huss. Dalton, with years of experience working with finish processes, was hired by Stelling in 1994 and began his career in instrument building.

During a visit to Huss’s shop that fateful summer, the two began brainstorming ideas that sparked the evolution of Huss & Dalton Guitar Company.