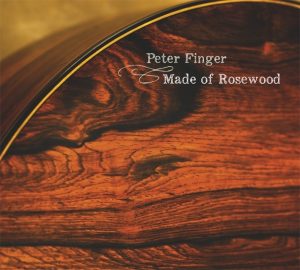 German fingerstyle guitarist Peter Finger is a virtuoso with impeccable technique whose compositions have a rare depth and complexity. As founder of the guitar specialty label Acoustic Music Records, publisher of the German-language magazine Akustik Gitarre, and founder of the annual International Guitar Night, Finger is also dedicated to providing a platform for his peers. In addition to all of that, he also somehow finds time to build guitars. Finger built his first guitar at the age of 17 (he is now 60) and used the instrument to record his debut album, Bottleneck Guitar Solos, for Kicking Mule Records in 1974. After a lengthy hiatus from lutherie (during which he played guitars by Lakewood, Lowden, and Ryan), Finger began building guitars again about a dozen years ago, and his instruments made appearances on his 2004 album Dream Dancer and 2010’s Flow. His latest release, Made of Rosewood, will firmly establish his reputation as an overachiever: its ten original compositions were recorded on a different self-made guitar!

The album’s opener, “Insight,” recorded with a grand concert completed in 2011, packs complex harmony, lightning-speed single-note lines, and rhythmically engaging playing into a miniature (80-second) composition. Like most of Finger’s work, this piece is strongly informed by modern classical composers and the guitarist’s background as a concert violinist, but with the undeniable influence of country blues and traditional fingerpicking. There are two notable exceptions however: “Requiem for a Best Friend,” recorded with a seven-string OM built in 2010, borrows heavily from flamenco “tarranta” harmony, while “Good Times (One for Chet),” played on an OM built in 2004, is a tribute to the late Chet Atkins and features Atkins’ distinctive thumb-picking style.

With its engaging twists and turns, Made of Rosewood is best listened to attentively, and its beautiful booklet, with descriptions and color photos of all the guitars used, make it worth ordering the physical CD. akustikgitarrist.de