For those roots-music fans who had come to rely on the HBO series Treme for a regular dose of New Orleans jazz, funk, and blues, Henry Butler and Steven Bernstein’s Viper’s Drag (released on the newly revived Impulse Jazz label), could not be more welcome and timely. With Viper’s Drag and their resplendent backing band the Hot 9, Butler, a virtuosic New Orleans jazz pianist who extends the line begun by Jelly Roll Morton, and Bernstein, a New York trumpeter/arranger who has shown how vibrant trad jazz can be with his Millennial Territory Orchestra, have created an exuberant tribute to New Orleans music, past, present, and future.

Using Butler’s piano vocabulary (“Henryism’s,” Bernstein calls them) as the basis for arrangements for the Hot 9, which includes Butler’s fellow New Orleanians (and Wynton Marsalis band members) Reginald Veal on bass and Herlin Riley on drums, guitarist Matt Munisteri, violinist Charlie Burnham, and a frighteningly funky horn section, Bernstein has created a sound that seems to mine all eras of New Orleans music at once. Using classic tunes like Fats Waller’s “Viper’s Drag”; Jelly Roll Morton’s “Buddy Bolden’s Blues,” “Wolverine Blues,” and “King Porter Stomp”; and Count Basie and Jimmy Rushing’s big band blues “I Left My Baby,” along with a reworked version of the New Orleans second-line anthem “Iko Iko” and a couple of funky Butler originals (including the backbeat-driven “Henry’s Boogie” ), Bernstein creates settings for Butler to display the range of his considerable piano chops in a sympathetic and swinging setting. 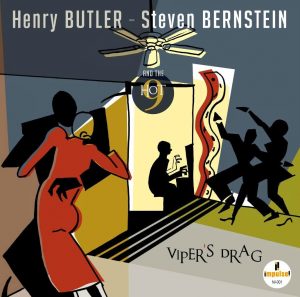 “Wolverine Blues” is a particular tour de force. Morton would barely recognize the first minute, with its sinuous contrapuntal contemporary funk lines, until a contemplative Butler interlude launches the band into a Dixieland rendition of the Morton melody, which gradually becomes funkier, morphing into second-line exuberance, followed by some solo Butler virtuosity which signals some New Orleans big-band swing, a modern tenor sax solo by Michael Blake, and some New Orleans mambo, before the introductory funk section returns as an ending. Phew! How they seamlessly fit all that into five and a half minutes, I have no idea. String players Munisteri, Burnham, and Veal are confined to secondary ensemble-based roles here, but if you crave a hot helping of NOLA musical gumbo, you won’t do better than Viper’s Drag. (henrybutler.com)