We are excited to announce a brand new mandolin course with a great new instructor joining Peghead Nation! In Brazilian Choro Mandolin with Ian Coury, you’ll learn to play Brazilian choro music on the mandolin with young Brazilian virtuoso Ian Coury, from the classic sounds of Jacob do Bandolim to the modern style of Hamilton Holanda. Includes play-along tracks with Ian’s Brazilian backing band.

In this video, Ian plays “Benzinho,” a traditional two-part choro in the key of D minor written by the great choro mandolinist Jacob do Bandolim. Ian teaches it in his Brazilian Choro Mandolin course. 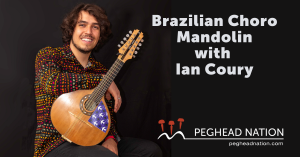