Ian walks you through the melody of the A part of “Naquela Mesa” in this video. 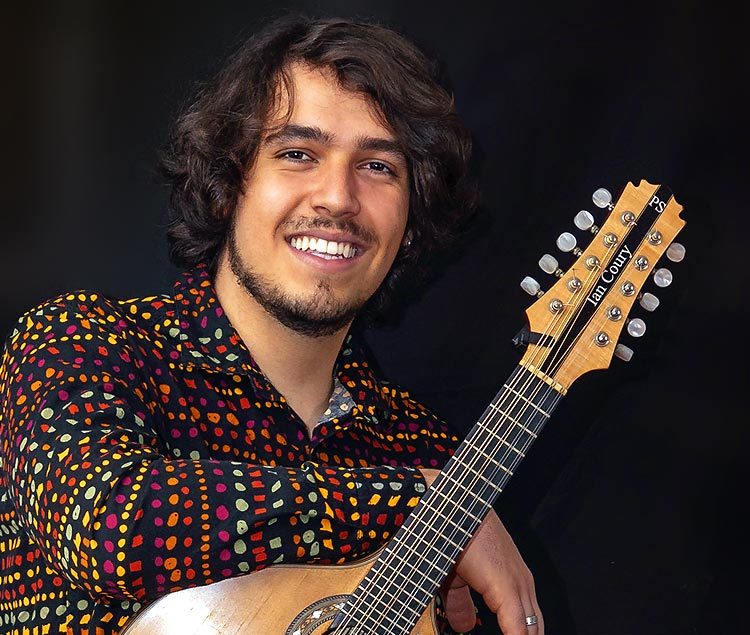 Ian Coury has been accruing professional awards and accolades since 2014, when he shared a stage with Brazilian choro legends Armandinho and Hamilton de Holanda at the age of 12. Today, he’s one of Brazil’s most-respected virtuosos of the ten-string mandolin. As he continues to push the boundaries of the instrument and of the choro genre, he has performed with such luminaries as Paquito D’Rivera, Claudio Roditi, and Toninho Horta, and has recently received two important awards: “Best Instrumentalist” in the National FM Radio Festival (2020), and second place (by popular vote) in Brazil’s eFestival (2021), both for performances of original compositions.
Instructor Page
Peghead Play-Along Tracks
Peghead Nation is creating a library of accompaniment videos (and downloadable MP3s) for songs and tunes that are taught on the site, classics that you'll find at many jams and picking parties. As a subscriber, you have access to this library and can use the tracks to practice playing tunes and songs at a slow or medium tempo with guitar accompaniment. New songs will be added regularly.
Brazilian Choro Mandolin Source Material

Check out these songs featured in the Brazilian Choro Mandolin course.

Learn to play Brazilian choro music on the mandolin with young Brazilian virtuoso Ian Coury, from the classic sounds of Jacob do Bandolim to the modern style of Hamilton Holanda. Includes play-along tracks with Ian’s Brazilian backing band.

In this introductory video, Ian talks about the importance of the mandolin in choro music and about some of the characteristics of the music that make it unique.

In the first Brazilian Choro Mandolin lesson, Ian shows you the beautiful D minor choro “Naquela Mesa,” written by Sérgio Bittencourt, son of the legendary Jacob do Bandolim, who was the most influential choro mandolinist. “Naquela Mesa” is a popular Brazilian choro and is often played (as a song and instrumental) at rodas de choros (choro jam sessions).

“Benzinho” is a traditional two-part choro in the key of D minor written by  the great choro mandolinist Jacob do Bandolim. It’s not one of the most popular choros, but it is well known at rodas de choros (choro jam sessions) and it's a good tune for players new to choro, because the harmony is very clear, and it’s not too difficult technically.

“Carinhoso” is one of the most popular Brazilian choros and was written by the legendary composer, flautist, and saxophonist Pixinguinha. “Carinhoso” is a beautiful, emotional tune, and in addition to being played as an instrumental, it’s also often sung.

The title of the choro “Eu Quero é Sossego” means “I just want peace” in Brazilian. Written by the choro composer and saxophonist K-Ximbinho, it’s a beautiful melody in D minor that can be interpreted in many different ways.

The choro classic “Assanhado” was written by Brazilian mandolin icon Jacob do Bandolim. It’s in the key of A and has two parts. The first part is melodically very simple but highly syncopated, while the second part has a lot of long, flowing lines and a circle-of-fifths chord progression.

“Receita de Samba” is another Jacob do Bandolim composition, and is a favorite at  rodas de choros and wherever choros are played. The title translates as “samba recipe.” It’s in the key of G and has an eight-bar chordal intro.

“Vibrações” is a beautiful slow choro in the key of D minor written by Jacob do Bandolim. Jacob uses a lot of ornaments and tremolo on his recording. Ian starts by showing you the basic melody, and then demonstrates how to play Brazilian-style tremolo and some typical mandolin ornaments.

The beautiful, slow choro “Pedacinhos Do Céu” (“Little Pieces from the Sky”) was written by Waldyr Azevedo, a very successful and important choro conductor, composer, mandolinist, and cavaquinho player who composed 130 pieces during his lifetime (1923–1980). “Pedacinhos Do Céu” is in the key of G and goes to the key of E minor in the second part.

The Jacob do Bandolim tune “Noites Cariocas” is a traditional choro classic. If you play choro mandolin, you play it. There are many versions, but Ian teaches you the original version played by Jacob.