News & Reviews: Recordings
Derk’s Discoveries: The Deep Roots of Laurie Lewis
On “and Laurie Lewis,” the Berkeley-based multi-instrumentalist mines a career’s worth of friendships for a brilliant collection of duets.
By: Derk Richardson
November 30, 2020

For the better part of five decades—ever since she emerged as a leading voice in the San Francisco Bay Area’s New Grass scene—Laurie Lewis has cultivated collaborations and long-term creative friendships with an extraordinary assortment of musicians. Ten of those dearest companions—from all across the panorama of bluegrass, country, and traditional folk in which they thrive, and from several generations—join Lewis on her latest album, the humbly titled and Laurie Lewis (Spruce and Maple Music). It is must listening for all fans of “peghead” instruments. 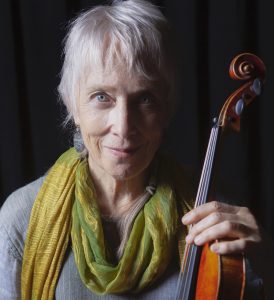 But the timing of its release could hardly have been worse: The rapidly growing COVID-19 pandemic put an indefinite hold on Lewis’s plans to support the album with live concerts, both in the Bay Area and on tour. The itinerary page on her website is a cascade of “cancelled” notices on gigs across the U.S. and Europe, in clubs and concert halls, at festivals and music camps, and on Lewis’s popular river rafting trips.

While the possibility of hearing Lewis in person has been diminished, the music on and Laurie Lewis nonetheless provides 50 minutes of exquisite listening in the form of 13 intimate duets. Lewis pairs off with one friend or another on six original compositions, several traditional tunes (“You Are My Flower,” “Will the Circle Be Unbroken?,” “O The Wind and Rain”), a bit of “golden age” jazz and Western swing, a Rosalie Sorrels classic, and a contemporary contribution from young songwriter Emily Mann.

Growing up in Berkeley, where she was born in 1950, Lewis experienced musical epiphanies hearing Doc Watson, Jean Ritchie, the Greenbriar Boys, Jesse Fuller, Reverend Gary Davis, Mississippi John Hurt, and others at the Berkeley Folk Festival. Already a classically trained violinist, she then took up guitar and bluegrass banjo. Another revelation was hearing bluegrass fiddlers onstage at Paul’s Saloon in San Francisco; Lewis realized she could do that too.

and Laurie Lewis is a Peghead geek’s paradise of stringed instruments, played by Lewis and . . . They are annotated in detail in the liner notes, including a Carl. C. Holzapfel early 20th century 12-string guitar, a 1927 Vega Tubaphone banjo, Charles Sawtelle’s 1929 Martin 000-45, an 1889 Jerome Bonaparte Squier violin, a 1922 Gibson Master Model mandolin, a 1962 reissue Fender Stratocaster, and many more.

Given the diversity of the material (inspired by everything from the Carter Family and the Nitty Gritty Dirt Band to a small mammal in the High Sierra), the consistently superior level of musicianship, and the emotional range, it’s impossible to pick out only one or two favorite performances. They change for me every time I listen to the CD. High on my list at the moment are the interweaving of Tuttle and Lewis’s voices and acoustic guitars on “The Lonely One,” the palpable, profoundly seasoned comradeship of Kallick and Lewis on “Old Friend,” and the ethereal wistfulness of the two tracks featuring Nina Gerber (longtime accompanist of the late Kate Wolf and current duo partner of singer Chris Webster) on electric guitar—Sorrels’s “My Last Go-Round” and the album closer “This Is Our Home,” a poignant, shimmering “lament for the planet.”

When Lewis was ready to release and Laurie Lewis last March and COVID-19 hit, she assumed she’d have to stay off the road for a few months. It’s been seven, and counting. Scheduled to appear at the 20th annual Hardly Strictly Bluegrass Festival in San Francisco’s Golden Gate Park in early October, Lewis instead made filmed appearances in the beautifully produced Let the Music Play On, HSB’s three-hour movie, streamed in lieu of the cancelled festival. No one really knows when we’ll get back to the inimitable experience of enjoying music live and in person whenever we want. In the meantime, grant yourself the pleasures of the hardly strictly bluegrass duets gathered on and Laurie Lewis.