News & Reviews: Breaking News
Register for The Song According to Matt Munisteri | Six-Session Live Zoom Workshop
Learn to improvise through chord changes and expand your fingerboard and theory knowledge by exploring some of Matt’s favorite songs from many genres.
By: Dan Gabel
August 12, 2022

In this six-session workshop, you’ll explore some of Matt’s favorite songs from a variety of sources: jazz, folk, country, western swing, rock, 1960s pop music, etc. Matt will show you how focusing on these great songs can help you learn to improvise through chord changes, master the fingerboard, expand your knowledge of music theory, and more. This workshop series is designed for intermediate-to-advanced guitarists.

The live sessions of The Song According to Matt Munisteri will be held on Zoom every other Wednesday from 5 pm to 6:30 pm Pacific Time (8 pm to 9:30 pm Eastern Time), starting on Wednesday, August 31, 2022, and ending on November 9, 2022. Video recordings of each session will be available to all students so you can review what you’ve learned or catch up if you need to miss a session.

The fee for the six-part workshop is $200 and, in addition to admittance to all six workshops, students will receive PDFs (notation and tab) related to each session, as well as access to the recordings of each workshop. Workshop recordings will be available to students within a week after each class, and you will retain access to all video and written materials after the live workshops have ended.

Sign up for The Song According to Matt Munisteri now!

Matt has this to say about his workshop: 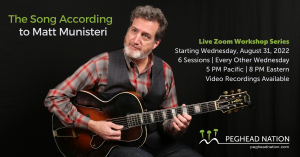 While I’ve gotten to play alongside many virtuosos that I admire, the repertoire and path of the virtuoso was never what I was focussed on—it’s not what spurred my development as a guitarist. The one thing that’s kept me coming back, kept me curious, motivated, and moving forward in my guitar playing is the song: the melodies, harmonies, and yes, even lyrics, to the countless songs that have taken possession of me since childhood. A song might do this only utilizing the mountain-stream melody of a nursery rhyme, or it might employ the rigorous architecture of a Harold Arlen blues opus. It doesn’t matter; once I’m inside a song (or vice versa?) the musical, lyrical, and emotional center of the song is where I turn to find meaning, and its shape is where I hang my improvisations. The mystery of a song’s special magic provokes my tinkering, and this impacts my guitar playing, prompting discoveries that help my soloing and my accompaniment. This is true whether I’m playing jazz, folk, rock or country, whether I’m using a pick or playing fingerstyle. There are many things my relationship with the song—as opposed to ”the lick” or “the scale” or “the chord”—helped me with.

Have you been hoping to find the secrets to “improvising through chord changes”? Many of the answers are right there in the melodies of hundreds of songs you can probably already sing. Do you want to understand “theory” so that it’s more than theoretical? Theory becomes settled truth when you delve into the popular songs of the first half of the 20th century, so learning more and of these songs can be a productive way to internalize theory’s teachings. Do you want to better understand (“unlock”) the fretboard? Learning how to accompany a sung folk song is a well-trod gateway for the beginner guitarist, but guitarists of every level will quickly find themselves in fretboard territory they’d never thought to visit once they push themselves to become more accomplished accompanists of popular melodies. Do you find yourself stuck, lost, or searching for ideas when taking a solo? Reaching back to the conversational lyricism found in plain-spoken blues and folk songs can help keep you anchored to the shore. Ultimately there is such a wide range of instrumental technique, and so much musical understanding—not to mention cultural and creative perspective—that my musical voice wouldn’t benefit from, if not for my loving and constant chasing down of songs!

Fortunately, my working life, both as a side person and a bandleader, lets me engage with a rangy songbook that blithely crisscrosses the North American continent with no regard for borders, geographical terrain, or era. So we’re gonna grow our guitar playing by looking at all kinds of songs, as we learn my own arrangements of both the very famous and very not-famous songs. We’ll be getting inside a personally curated set of compositions, as we learn what makes them tick and what lessons we can take away to improve our chordal playing, our soloing, and perhaps even our own songwriting. It should be a lot of fun to crack the pages of a songbook that goes from the Beatles to the Bolicks; from Woody to Hoagy; Willie to Willard Robison; Cindy Walker to Randy Newman; Zimmerman to Guaragna; Richard Rodgers to Connie Converse; Irving Berlin to Brian Wilson; Sarah Carter to Carter Stanley; Stephen Foster to Dorothy Fields; Cole Porter to Porter Wagoner.

I hope this unique class will excite you as much as it does me!

Sign up for The Song According to Matt Munisteri now!

Matt Munisteri is a guitarist, singer, and songwriter based in New York. A freewheeling and virtuosic guitarist on both acoustic and electric guitar—in music both modern and old-fashioned—he credits the early jazz plectrists of the 1920s and ’30s with providing the foundation for his technique and musical direction. As one of a relatively small number of authoritative acoustic jazz guitarists playing swing and early jazz, Matt has recorded extensively and is a first-call guitarist when a “period” sound is sought for CDs, film scores, and commercials. He has performed on A Prairie Home Companion, Jazz Night in America: Jazz at Lincoln Center, E-Town, Mountain Stage, and Michael Feinstein’s Song Travels.