We’re excited to welcome guitarist, singer, and songwriter Stash Wyslouch to the Peghead Nation teaching roster! In his new course, Bluegrass Guitar Fingerboard Mastery, Stash shows you his step-by-step approach to decoding the mysteries of the guitar neck through the lens of bluegrass, old-time, and country music. 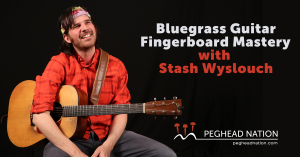 Bluegrass has been central to Stash’s life for the past 15 years touring and recording with groups such as the Deadly Gentlemen, Bruce Molsky’s Mountain Drifters, the Jacob Jolliff Band, and Tony Trischka’s Early Roman Kings. He has recorded four albums, the latest of which, Plays and Sings Bluegrass Vol. II, was released in 2021. Conceived as a gift back to the music that has framed his career, Plays and Sings Bluegrass Vol. II is a collection of zanily deconstructed bluegrass classics.

In this video, Stash plays the traditional gospel song “Jonah” in the Peghead Nation studio. Join him in his new course, Bluegrass Guitar Fingerboard Mastery, available now! Click here to check out his course introduction video.