In this lesson, you’ll learn triad inversion shapes for C, F, and G chords on the GBE string set and use them to play the traditional song “Roll On Buddy” in the key of C. 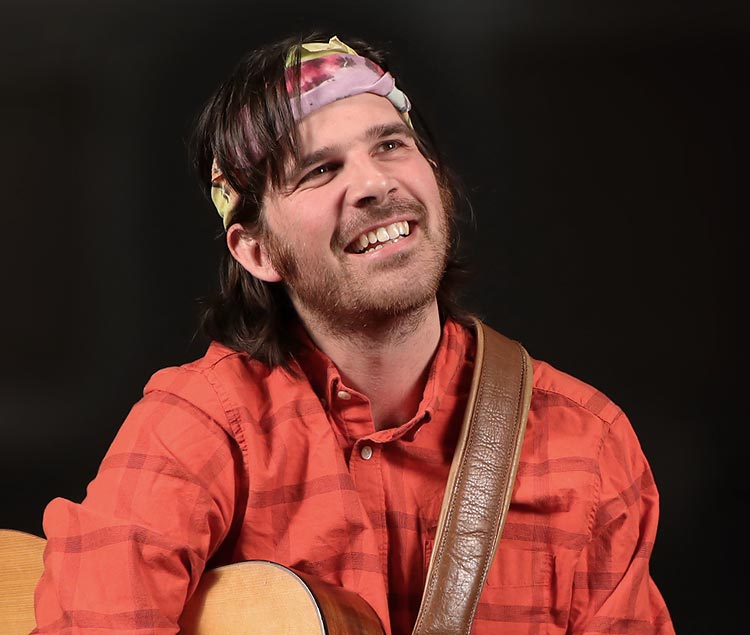 Stash Wyslouch is a bluegrass guitarist, singer, and songwriter. Despite his heavy metal beginnings in middle and high school, bluegrass has been central to Wyslouch's life for the past 15 years touring and recording with groups such as the Deadly Gentlemen, Bruce Molsky’s Mountain Drifters, the Jacob Jolliff Band, and Tony Trischka’s Early Roman Kings. He has recorded four albums, the latest of which, Plays and Sings Bluegrass Vol. II, was released in 2021. Conceived as a gift back to the music that has framed his career, Plays and Sings Bluegrass Vol. II is a collection of zanily deconstructed bluegrass classics.
Instructor Page
Peghead Play-Along Tracks
Peghead Nation is creating a library of accompaniment videos (and downloadable MP3s) for songs and tunes that are taught on the site, classics that you'll find at many jams and picking parties. As a subscriber, you have access to this library and can use the tracks to practice playing tunes and songs at a slow or medium tempo with guitar accompaniment. New songs will be added regularly.
The Bluegrass Guitar Fingerboard Mastery Subscription Includes:
$20/Month For One Course
Additional courses only $10/month each!   •   Save 20% with an annual subscription
Start Course
Get started now!
Use promo code StashLand at checkout
and get your first month free or $20 off an annual subscription.
Bluegrass Guitar Fingerboard Mastery Course Outline
Welcome to Bluegrass Guitar Fingerboard Mastery

Stash talks about his approach to the guitar neck and what you’ll be learning in Bluegrass Guitar Fingerboard Mastery,

In this lesson, you’ll learn triad inversion shapes for C, F, and G chords on the GBE string set and use them to play the traditional song “Roll On Buddy” in the key of C.

Stash shows you the five most useful open-position scales on the guitar: G, C, D, A, and E. You’ve already learned open C, so Stash starts with the open-position G scale and then moves on to the other three. He also talks about internalizing the degrees of the scale as you practice them. You’ll also learn to play the old-time country song “Wabash Cannonball” in G position.

Stash shows you how to harmonize “In the Pines” with triads in this lesson. He starts by showing you the melody to “In the Pines” on the high E string and then, whenever a note of the melody is a chord tone, he harmonizes it with a triad on the GBE string set.

Crosspicking “In the Pines” - New Lesson