John adds a drone string to much of the melody of the B part of “Little Liza Jane,” and the first phrase begins with a clawhammer-style rhythm. John walks you through it phrase by phrase and then shows you how to find the melody of the A part an octave up the neck. 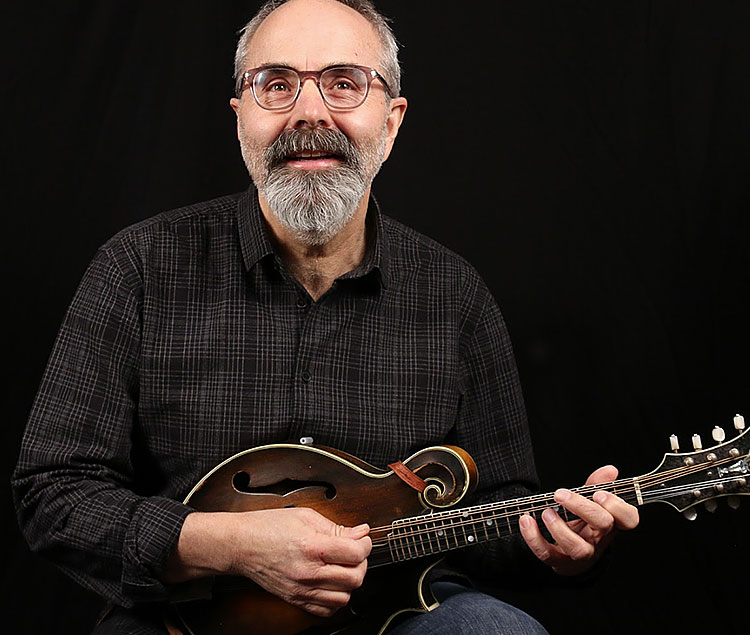 John Reischman is one of the premier mandolinists of his generation, a master instrumentalist capable of swinging between re-inventions of traditional old-time tunes, deconstructions of the bluegrass repertoire, and compelling original tunes, many of which have become standards. A Juno–nominated and Grammy–award winning artist, John got his start as an original member of the Tony Rice Unit in the late 1970s and is known today for his work with his band the Jaybirds as well as his acclaimed solo albums.

Instructor Page
Peghead Play-Along Tracks
Peghead Nation is creating a library of accompaniment videos (and downloadable MP3s) for songs and tunes that are taught on the site, classics that you'll find at many jams and picking parties. As a subscriber, you have access to this library and can use the tracks to practice playing tunes and songs at a slow or medium tempo with guitar accompaniment. New songs will be added regularly.
Old-Time Mandolin Source Material

Check out these songs featured in the Old-Time Mandolin course.

John demonstrates his approach to playing rhythm to old-time tunes in this video. He takes his cue in large part from banjo-uke players in old-time string bands, playing open chords with a steady eighth-note picking pattern with an emphasis on beats two and four instead of the percussive off-beat chop common to bluegrass rhythm mandolin. He also shows you some of the two-finger chords he likes to combine with open strings for a drone effect.

John explains the basic picking technique you’ll use to play the tunes in his Old-Time Mandolin course: alternate picking. In this technique, you play downstrokes on the beats (1, 2, 3, 4) and “alternate” them with upstrokes on the “ands” of the beat.

The old-time tune “Salt River” comes from fiddler Norman Edmonds and John learned it from Bruce Molsky. It’s not the same as the bluegrass jam favorite “Salt Creek” but has a similar modal tonality. You’ll learn the melody for both parts played mostly on the top strings as well as a version of both parts played in the lower octave.

The Road to Malvern

“The Road to Malvern” is a contemporary old-time (“new-time”?) fiddle tune in the key of A and it’s one of John’s favorites. After showing you the melody, he also shows you a couple variations he plays and talks a little about improvising on a fiddle tune like “The Road to Malvern.” For playing rhythm to old-time tunes, John often likes to use open chords and play with more of a regular eighth-note-based strum, with emphasis on beats two and four. You’ll learn the voicings John uses and his strum pattern.

John learned this Civil War-era melody from Nick Hornbuckle, the banjo player in John Reischman and the Jaybirds. It’s a nice stately tune in the key of G minor. John shows you how he moves between first and second position on one phrase and adds some double stops to the melody. He also explains the anticipation at the beginning of some of the phrases.

The old-time fiddle tune “Liza Liza Jane” (also known as “Liza Jane” and “Old Liza Jane”) is often played on the fiddle in A, but John plays it in D, and recorded it recently in that key with Peghead Nation instructors Scott Nygaard and Sharon Gilchrist on the album Harmonic Tone Revealers. In addition to the melody, John shows you a few variations and how he plays the B part with a clawhammer-style rhythm and drone strings. He also shows you how to find the melody of the A part an octave up the neck.

John’s arrangement of the traditional song “Little Maggie,” in which he plays the melody as a low air and as a frailing banjo tune, was influenced by a recording of Mike Seeger and Paul Brown. You’ll learn both versions in this lesson. John starts by walking you through the melody of the slow version, which is played rubato (without a regular pulse) and giving you advice on making the notes sustain into one another. Then he shows you the “frailing banjo” version, in which the melody is played in time with the addition of strums on the top two strings.

The old-time fiddle tune “Half Past Four” comes from the great Kentucky fiddler Ed Haley, who was recorded by his son in a series of home recordings in the 1940s. It has also been making the rounds of bluegrass jams lately, and John recorded it with Sharon Gilchrist and Scott Nygaard on Harmonic Tone Revealers.

John learned the old-time tune “Last Chance” from a recording of banjo player Hobart Smith, and recorded it with his band John Reischman and the Jaybirds on the CD Vintage and Unique. It’s in the key of F, an unusual key for an old-time tune, with some syncopated phrases.

The old-time fiddle tune “Jenny Lynn” comes from the father of bluegrass, Bill Monroe, or rather his fiddle-playing Uncle Pen Vandiver. John shows you the melody, which is in the key of A, as well as how to play the A part up the neck so you can add A and/or E drones to the melody.

“Washington’s March” comes from West Virginia fiddler Edden Hammons, who played it in DDAD tuning. John shows it to you in standard tuning on the mandolin and also in GDAD tuning, with the E string tuned down to D.

The three-part fiddle tune “Jeff Sturgeon” comes from North Carolina fiddler John Morgan Salyer. It’s in the key of A Mixolydian and the form is unusual: the first and third parts are crooked, with an extra bar of 2/4 and the second part is four bars long and is only played once.

In this lesson, John shows you how to embellish a simple sung melody, using the traditional favorite “Long Journey Home.” He starts by showing you the basic melody of “Long Journey Home” and then how to slide into melody notes, use drone strings, and add intro and ending licks.

Shove that Pig’s Foot a Little Further in the Fire

The fiddle tune “Shove that Pig’s Foot a Little Further in the Fire” comes from North Carolina fiddler Marcus Martin and has become a favorite at jam sessions everywhere. It’s in the key of G and has a great, memorable melody.

“Happy Hollow” comes from North Carolina fiddler Marcus Martin, who played it in AEAC# tuning (often called calico tuning or “Black Mt. Rag” tuning). Since it’s difficult to tune the bottom strings of a mandolin up a whole step, John plays “Happy Hollow”  in GDGB tuning, although he recorded it on his album New Time and Old Acoustic in GDGD tuning.

The Civil War–era song “The Blackest Crow” is also known as “As Time Draws Near” and “My Dearest Dear,” the name that old-time fiddle legend Tommy Jarrell gave it. John shows you the basic melody and then how to embellish it with double stops, tremolo, and hammer-ons.

The fiddle tune “Indian Killed a Woodcock” comes from Kenny Baker, best-known for his fiddling with Bill Monroe and the Blue Grass Boys. It’s a bright dance tune in the key of G and is popular in old-time and bluegrass circles.

In this lesson, you’ll learn a version of “Liza Jane” that John learned from fiddler Rafe Stefanini, who played it in AEAE cross tuning on the fiddle. John plays it in GDGD tuning on the mandolin, which allows you to add drone strings to the simple melody.

The Carter Family song “Foggy Mountain Top” is an old-time and bluegrass favorite, recorded by Bill and Charlie Monroe, Flatt and Scruggs, and many others. In this lesson, John shows you how to play the melody to “Foggy Mountain Top” in the key of F in closed position using double stops. He starts by showing you the basic melody and then how to add double stops in F as well as a few melodic variations.

“Elk River Blues” is not really a blues, but it does have a mournful quality. It was written by West Virginia fiddler Ernie Carpenter as a lament for his homestead when it was flooded during construction of the Sutton Dam on the Elk River in West Virginia. It has two short parts, each of which is played twice, and the phrasing is unusual: each part is 4½ measures long.

The old-time fiddle tune “Goin’ Up Caney” comes from Bill Monroe, who learned it from his uncle Pendleton Vandiver. It's in the key of G and the second part goes to the relative minor (E minor).

“Christmas Eve” is a fiddle tune in the key of G that John learned from Mike Seeger. He also recorded it on the John Reischman and the Jaybirds album On a Winter’s Night.

The fiddle tune “Hunt the Buffalo” originally comes from Arkansas singer and songwriter Jimmy Driftwood (who is best known for writing songs like “Tennessee Stud” and “The Battle of New Orleans”). But it has evolved quite a bit and most people play it a bit differently these days. John learned “Hunt the Buffalo” while teaching at the Montana Fiddle Camp.

The old-time dance tune “Katy Bar the Door” comes from Carroll County, Virginia, banjo player Roscoe Parrish. John learned it from Greg Spatz, who plays fiddle in John’s band John Reischman and the Jaybirds. It’s a square dance tune in the key of the D, and the second part starts on an A chord. John plays it with a nice syncopation of the second phrase of each par