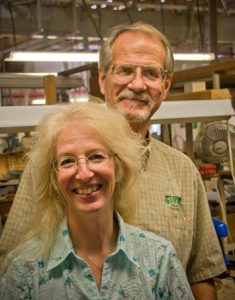 Greg Deering began learning woodworking from his father at the age of two by watching him build model airplanes. Growing up in San Diego, he received his first tools and tool box which he had carefully laid out in his wagon on his third birthday. Many of these tools he still has today. That is how important this was to him. It was a career in the making.

At the age of 12, Greg purchased his first banjo by investing a month’s pay from his paper route into a used banjo. He learned to play Kingston Trio songs on his banjo with his best friend Tom playing guitar.

Greg made his first banjo as an industrial arts major at San Diego State College. In 1970, at 19 years of age he joined other enterprising young college students at the American Dream Co-Op and began doing instrument repairs and building banjos. This co-op would become the birth place of at least four now world renowned instrument manufacturers – a true tribute to the concept of the American dream! The American dream became the theme of Greg’s life when he and Janet started the Deering Banjo Company in 1975 as a family business. Together they not only raised two children but built, piece by piece, the Deering banjo factory.

Today, over 39 years later, the Deering Banjo Company has seen many a milestone including the launch of the Goodtime Series in 1997, the relocation to a new 18,000 sq.ft. premises in 2001 and the launch of the Eagle II in 2009, a breakthrough in banjo tone with the development of the new Twenty-Ten™ tone ring.

In its young 39 year life, Deering has delivered the finest hand built American instruments to over 100,000 happy musicians and counting… one banjo at a time.