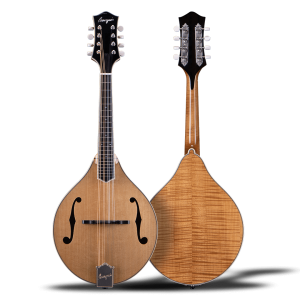 While luthier Dana Bourgeois is better known for his expertise around flattop guitars, he has also built a significant number of archtop guitars, and he has now applied this knowledge to designing a mandolin. Taking advantage of his company’s partnership with the Eastman Music Company (which has recently yielded the introduction of the Touchstone Series of guitars), Bourgeois is introducing the A-style Aged Tone M5A. Built with an Adirondack spruce top and maple back and sides (both woods received Bourgeois’ Aged Tone treatment), the instrument is built to deliver an expressive, complex voice. Hardware includes a custom engraved Bill James tailpiece and Golden Age tuning machines, and the instrument comes in a hardshell case. Watch for a Peghead Nation demo of the instrument in the near future!