News & Reviews: Recordings
Derk’s Discoveries: A Day in the “Life Of” …
Eight years in coming, the new album by 12-string guitarist Steve Tibbetts is a beautiful rumination on what it means to be human.
By: Derk Richardson
July 23, 2018

In 1994, I put guitarist Steve Tibbetts’s The Fall of Us All on my list of the year’s top ten recordings. Some time later, a guy walked up to me in Yoshi’s, when the jazz club was on Claremont Avenue in Oakland, and said I owed him $13.98. He’d purchased the album on my recommendation and wasn’t happy with it.

Today, almost no one buys a record without hearing audio samples from it first. (OK, maybe almost no one buys records anymore.) So it’s likely you’ll go online to listen to Tibbetts’s new CD, Life Of, before you pony up maybe even less than $13.98 for 13 tracks and just over 50 minutes of what I think is exquisite music. 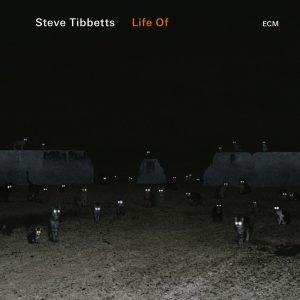 On his ninth album for ECM since he debuted on the label with 1982’s Northern Song, the Minnesota-based Tibbetts stays the acoustic course he mapped on his prior ECM release, 2010’s Natural Causes. (Yes, it has been eight years between albums, indicating how much thought and care the guitarist puts into each project.)

Playing a Martin D-12-20 (without a pick) that his father gave him in late 1970s—a 12-string with worn frets and dead strings (the latter inspired by Leo Kottke) in unison courses (no octave pairing on the lower strings)—Tibbetts creates slowly unfolding, atmospheric vignettes, many titled for friends and heroes and tangential acquaintances (“Life of Joel,” “Life of Joan,” “Life of Someone”), and incorporating his own Balinese-gamelan-influenced piano parts, longtime collaborator Marc Anderson’s percussion, and Michelle Kinney’s low-key cello and drones.

As he usually does, Tibbetts recorded the copiously overdubbed album—his 13th overall—at home in St. Paul. Then he mixed it in the nearby Macalester College concert hall, bringing the room’s ambience into the overall sound. “It’s a more labor-intensive process, and the effect is perhaps subtle to most ears,” he writes on his website. “But it feels more organic to me, adding some reality to the sound. I suppose it’s like a bay leaf in a soup—it has an intangible effect that adds to the experience. … I want the records to have a human, handcrafted quality.”

Life Of is not an exciting record, in the way that the thrillingly bombastic A Man About a Horse and the Fall of Us All were. Listening to it is a contemplative experience, an inducement to pay close attention to the details, the subtle shifts, and the understated emotions; to Tibbetts’s string bends and melodic fragments; to the meticulously placed piano and percussion, and the vapors of cello and drones. Play it softly and the effect is soothing and mesmerizing; turn up the volume and it enfolds you, merging your mindfulness with that of the musicians. The residue of Tibbetts’s global travels (Bali, Nepal) and varied listening (guitarists Bill Connors and Harvey Mandel, sarangi master Sultan Khan) may not be strikingly obvious, but it provides the ground for these miniature concertos that are organized into a flowing suite.

“I’m not churning out a tremendous amount of music, it’s true,” Tibbetts writes. “But I think my listeners trust me. When I take the time to put something together over a long period and am finally satisfied with it, I think they will be, too.”

PS: Neither he nor I offer refunds.