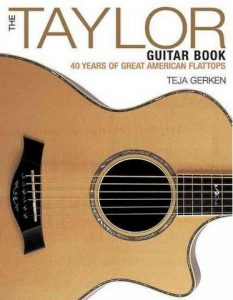 The Taylor Guitar Book is the latest release in Backbeat Books’ series of Tony Bacon–produced titles about guitar makers. Authored by Peghead Nation’s Teja Gerken, The Taylor Guitar Book begins with Taylor Guitars founder Bob Taylor’s first attempts at building guitars in his high school shop class, and ends with a look at Taylor Guitars’ current instruments. With hundreds of color photos, the book shows instruments from throughout Taylor’s history and illustrates many of the designs that the company has become known for, such as bolt-on neck joints, the company’s proprietary electronics, etc. Presented chronologically, the book follows the company history, discusses new instrument models and features as they were introduced, and concludes with a detailed reference section for identifying Taylor instruments.

The book includes interviews with Taylor and co-founder Kurt Listug, Taylor’s early mentor Sam Radding, designers David Hosler and Andy Powers, and guitarists including early Taylor endorser Chris Proctor. “I already knew a lot about Taylor when I began working on this project, but it was fascinating to get deeper into the story of how Bob and Kurt first started on a shoestring and trace their efforts up to the present day,” Gerken says. backbeatbooks.com