News & Reviews: Breaking News
Glimpses of Guy
On an oddly damp drive around San Francisco, Guy Clark shared a few thoughts about building guitars, filming Heartworn Highways, and his dislike of festivals.
By: Dan Gabel
May 18, 2016

We just lost one of the best songwriters to ever put pen to paper. Guy Clark was widely acknowledged as one of the greats, and hearing him perform or just listening to Dublin Blues, Old No. 1, The Dark, or any of his fifteen-plus albums serves as a master class in how to craft stories and create characters. Of all of the losses of musical giants that we’ve had recently, this one hits me hardest. Guy has been a huge part of my life’s soundtrack, there to get me through moments of heartache, joyous celebration, death of loved ones, big life changes, and much more. I’m not alone, I know. 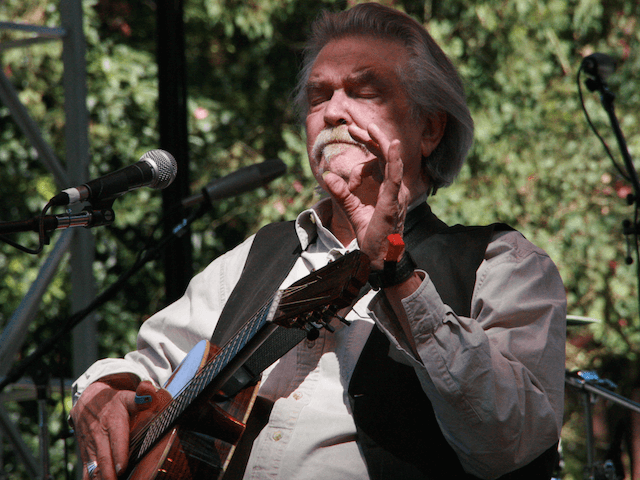 I was fortunate enough to meet Guy Clark twice, and I think about those times now. My most lengthy and, as it turned out, nerve-wracking, encounter with Guy was in the fall of 2006, when he had recently released Workbench Songs and was in town for San Francisco’s annual Hardly Strictly Bluegrass Festival. At the time, I was the Group Publisher at Acoustic Guitar magazine, and we were doing a cover story on Guy. Derk Richardson, who was then AG’s Managing Editor (and is now a Peghead Nation blogger), was lined up for Guy’s transportation duty that night, but he asked if I wanted to drive him instead. I’d pick him up from the Miyako Hotel and take him to photographer Jay Blakesberg‘s South of Market studio for a photo shoot and interview, to be conducted by writer Melanie Haiken. I think Derk just threw me a bone because he knew that Guy had a firm spot on my Mt. Rushmore of songwriters. “Stuff That Works,” “Homegrown Tomatoes,” “Boats to Build,” “The Cape,” “LA Freeway,” “Dublin Blues” . . . I learned them all and more on a quest to try to understand a little of how Guy wrote such evocative, detailed, and perfect songs, and maybe have a little bit of the mojo rub off. 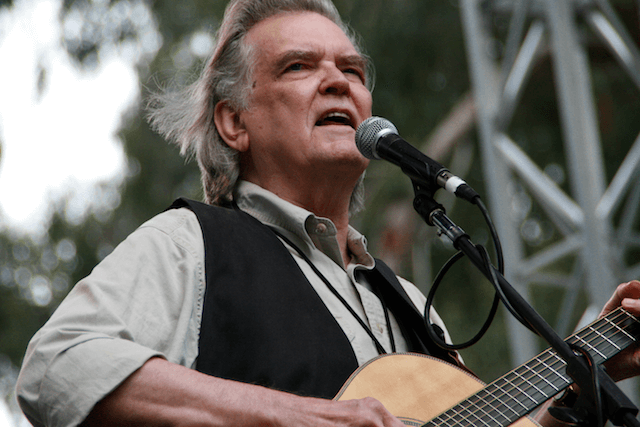 I was immediately interested in being Guy’s chauffeur, obviously, but I had an issue. Namely, our car. Ten years old, with a dent or two in the passenger side door, dirty inside. A bit of a mess, in other words, and in my mind, not fit for carting a songwriting legend around San Francisco. So, I hedged for a couple hours and then, after my wife, Lisa, graciously agreed to get the car washed while I finished work, I told Derk I was in and got the details for the evening.

This is where the nerve-wracking bit came in. A few minutes before I had to leave to pick up Guy, Lisa brought the car home and proudly proclaimed that she had a surprise. I went out to the car to find her kind of mopping the passenger side seat – Guy Clark’s eventual seat – with a towel. “I had it steam cleaned! It might . . . uh . . . still be a tiny bit damp,” she said with a nervous laugh. These are the times that test a marriage. The car looked great and I was thankful, but the seats felt more wet than damp, and I was now convinced that I’d deliver Guy Clark to the studio with wet jeans, shirt, and . . . you get the picture. No time to dry off Guy’s seat, no time to get another car or arrange for a limo. No choice. We grabbed two of our very best towels, put them on the two front seats, agreed that “we’ll laugh about this one day,” and off I went, a strong inner dialogue running.

On the drive to San Francisco, I kept taking assessment of how my Southern regions were feeling. If I was soaked by the time I got there, it meant that Guy would be soaked by the time we got to Jay’s. Ugh. My impression of Guy is that he did not suffer fools, and I had irrational visions of him packing the famed Randall Knife at all times just in case. That didn’t help.

Once I was in the Miyako Hotel waiting for Guy to come down, I noticed that my lower back was a little damp, but the rest of me was fine. At that point, there was nothing to do but let it go and hope for the best.

Guy came out of the elevator carrying his white Calton guitar case in one hand and a rolled-up plastic baggie in the other. That baggie was his tobacco, I’m pretty sure, and not the “Worry B Gone” he sings about on Workbench Songs. With Guy, his guitar, and his roll-your-own in my car, I tried to focus on being in the presence of one of my heroes more than what was happening with any unwelcome moisture. Guy didn’t seem to notice an issue, or if he did, was too polite to say anything. And I wasn’t about to ask Guy Clark how his “seat” felt. 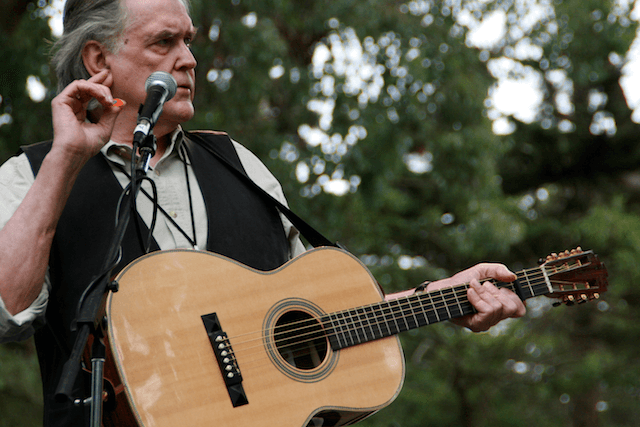 Guy with his 000 12-fret guitar that he built. Rosewood back and sides, spruce top.

As we started down Post toward Hyde, Guy talked about living in San Francisco for a year in 1969. He said it was “more Altamont than Woodstock by then,” getting rough. He talked about his shock as a good Texas boy seeing folks stepping over homeless people. He’d never seen that before, and it still struck him as “just not right.” That made me think of his song “Homeless” on The Dark, which always struck me as a compassionate take on the subject.

I asked him about his guitar building, and he said he hadn’t been doing much in the past year because of other things going on. He didn’t talk about the cancer that he’d been fighting, but was alluding to it. He talked about getting started with guitar building because he simply loved tonewood so much that he bought a stash and carried it around with him in his van, along with a few tools. He figured he’d start building when he got the chance and that he didn’t have a workshop for a long time because he’d built a recording studio in his house. “I just hate fucking studios,” he said and chuckled. He ignored the studio for the longest time, until he looked at it one day and the console hadn’t been used in about five years, accumulating a fair pile of dust. “What’s wrong with this picture,” he recalled thinking, and started converting the recording studio into his guitar workshop.

He talked about how tough of a living it is for people who build instruments full time, mentioning that he lived right down the street from luthier Paul McGill in Nashville, and they talked about it all the time – looking at copies of Acoustic Guitar magazine and seeing “hundreds of little ads for luthiers.” He wondered where they all came from and how they made it, and he expressed respect and a little awe at the builders making six guitars a year and charging $15,000 for each. 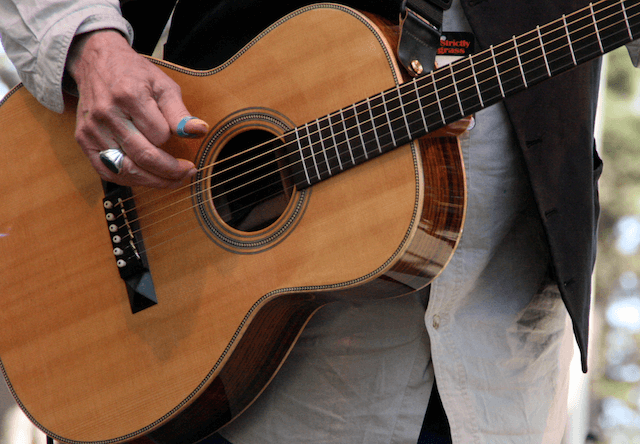 I mentioned the scene in the documentary Heartworn Highways, filmed in 1975, where he’s in his shop working on a guitar and said that he sounded like he’d been building a long time even then. Guy grinned and said, “I got a story for you about that. There were all of these New York guys running around filming, and we were all trying to impress them. I was talking all this shit about scale length and bone and thought I was real smart.” He said he was working on his friend’s guitar and was so into impressing the New Yorkers that when he was done filing the frets and cutting a saddle on the guitar he managed to string it upside down.

“So when the young boy comes in and you have him play a note to tune the guitar . . .” I said.

“That’s my son,” Guy said. “That’s exactly when I knew I’d fucked it up. Go back and look [see below] and you’ll be able to see that it’s strung up wrong.”

Guy said that they cut the movie right there so nobody ever really knew. He laughed hard about that.

Then he talked about the scene in the movie where his friend, songwriter Townes Van Zandt jumped down into the rabbit hole, and “those New York guys” didn’t know what to do. He said that he and the others were used to it, this being Texas. But the filmmakers kind of stopped and wondered if they should go in after him, help him out, or what. Guy’s appreciation for the craziness of Townes was obvious as he recounted that moment. 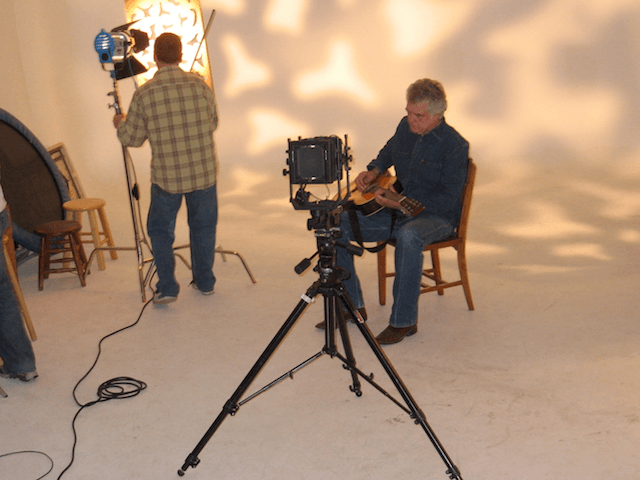 We were then at Jay Blakesberg’s studio, and the business got underway. Jay was quick and efficient with the photo shoot, and Guy didn’t really want to smile much. When he saw one of the rare photos in which he was smiling, he told Jay “well that’s a little namby pamby.” He seemed world-weary and tolerant during the photo shoot, and he wasn’t going for happy. I listened a bit while Melanie interviewed Guy, and it was enlightening to hear him talk about his songwriting process. The resulting cover story was published in the April 2007 issue of Acoustic Guitar, and it’s worth a read if you can find it.

It was a short ride back to the hotel, Guy seeming tired. I asked him if he was looking forward to Hardly Strictly, and he said it was always a good time, though he admitted that he really wasn’t much for festivals. “Lots of guys play them all summer,” he said. “But to tell you the truth, dogs, daylight, and crowds just ain’t my thing.” That was my favorite line of the night, and maybe of the year.

He also talked about his health a little bit, about radiation treatments and getting shot up with “shit that makes you glow,” but he seemed in decent spirits about it, and it gave me the opportunity to tell him that I’m glad he was still around and on the mend.

We made it back to the hotel, and I opened up the trunk and handed Guy his guitar. He said to call if we needed anything, and I watched a (seemingly dry) legend stroll off to the hotel entrance. I drove home feeling tired, too, and glad I’d taken the opportunity to meet a hero and even have a couple laughs with him. I felt like my few minutes with Guy gave me insight into some of those songs that have touched so many, and to a bit of the depth you hear in that voice. That Guy Clark didn’t get soaked in our freshly steamed car seats was a major bonus. And yes, Lisa and I laugh about it still.

Thanks, Guy, for the music and the memories.