News & Reviews: Breaking News
BB King Remembered
The embodiment of blues music took audiences on a soulful ride with his lyrical guitar style and one-of-a-kind voice.
By: Orville Johnson
May 19, 2015

When BB King passed away last week at 89 years of age, the entire world noticed. He was the embodiment of blues music for folks from India, Brazil, Mali, and every other corner of our planet, as well as right here at home. Though James Brown claimed the mantle of “the hardest working man in show biz,” he had nothin’ on BB. Three hundred plus shows a year since the 1970s, playing for presidents, prime ministers, and common people the world over—and he only began slowing his pace a couple of years ago. He had the biggest crossover hit in the history of the blues with his string-drenched version of “The Thrill Is Gone,” a singing style that reached deep into the heart of everyone that heard it, and an instantly recognizable voice on the guitar that gave every single note the attention it deserved and filled each space between the notes with lingering longing and desire, never calling the slightest bit of attention to his technical skill, only to his artistry. 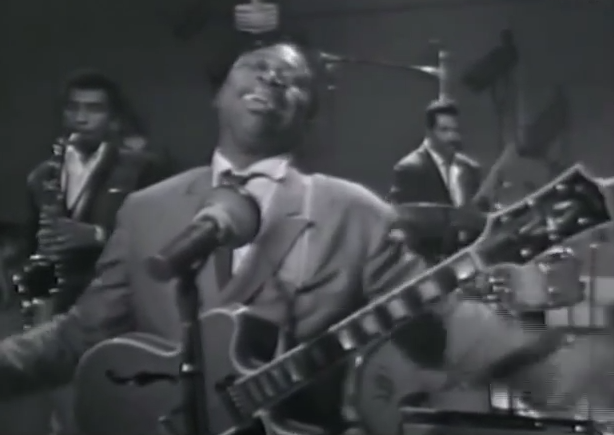 I was privileged to see him play many times but the most memorable was the first. I grew up in Edwardsville, Illinois, home to a branch of Southern Illinois University, and during the late 1960s and throughout the 1970s the University hosted an outdoor music gathering called the Mississippi River Festival. It had a large tent that contained the stage and seating for 1,900 folks, opening out onto a sloping bowl-shaped grassy area that made room for thousands more. Some of the rock shows drew upwards of ten to twenty thousand,  and it was a beautiful place to see a concert. When I saw BB there (with special guest Muddy Waters) it was a mid-week show and the crowd was probably three or four thousand, quite intimate for the venue. Unlike the many times I saw BB later on, after he had had his massive hit with “The Thrill Is Gone” and his audiences grew like crazy, this audience was primarily African American. After Muddy had warmed everybody up with a set of raucous Chicago blues, BB’s band came out, a smoking blues orchestra with horns, organ, piano, and singers, and it worked the crowd into a frenzy leading up to the King’s entrance. He toyed with the audience in a way I never saw him do again, playing call-and-response phrases, getting the women to squeal with delight, prowling the stage, and bringing the heat. During a particularly soulful slow blues, as the band clamped it down to just the ticking of the hi-hat and a wisp of an organ chord, BB clutched the mike stand with both hands and belted out an elemental moan. The crowd was stone quiet. Then, suddenly, BB began to crumple and fall! The women screamed as BB’s piano player jumped up to grab him before he hit the floor. The music stopped for a few seconds. Only the faint organ chord hung in the air. The piano man helped BB slowly right himself, the drummer whacked the snare, and BB snarled back into the tune right where he left off, as the crowd went nuts!

I’m very thankful my time here on the planet coincided with his and, as sorry as I am that he’s gone, I can’t be too sad because, gosh, what a life he lived! He gave such joy and healing to so many people in a tremendously successful life and career. BB King is one artist who will truly never be forgotten.