Founded by brothers Eben and Michael Grace in the early 1990s, Grace Design has become known for its extensive line of high-end mic preamps and other studio gear. Acoustic musicians took note when the company introduced the Felix instrument preamp last year. Clearly Grace Design did its homework when designing the Felix, including pretty much any feature an acoustic musician might when amplifying an instrument. The Felix can not only improve the sound of a pickup or microphone through its extensive EQ and high-quality components, it can be used to blend two sources, switch between two instruments, provide phantom power for external or internal mics, mix an instrument and vocal mic, and much more. 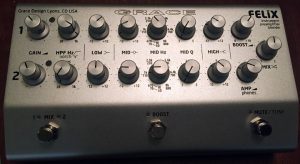 Connections on the back of the unit include a pair of XLR DI outputs; four 1/4-inch jacks for tuner, footswitch, amp output, and effect insert, as well as XLR and 1/4-inch instrument inputs for channel 1 and a 1/4-inch input for channel 2. 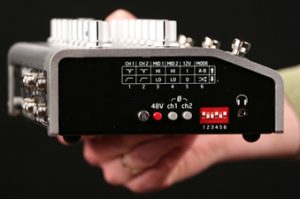 A set of dip-switches on the side allows customization of several of the Felix’s functions, such as choosing whether each channel includes a high-pass filter or notch filter, two possible frequency ranges for the parametric mid controls, stereo input, channel switching, and more.

We tried the Felix using a Lowden O10 guitar with LR Baggs Anthem SL electronics and an external Neumann KM184 microphone, and a Collings MT-2 mandolin outfitted with an Audio Technica PRO 35 microphone, and got excellent results all around. By combining the guitar’s onboard electronics with a high-quality studio mic, we got a very natural sound, and the Felix’s powerful EQ and warm sound helped the mandolin retain its acoustic tone when amplified.

For players who don’t require two channels, Grace Design has recently released a single-channel version called the Alix, which is designed as a powerful preamp/EQ/boost pedal/DI for any type of pickup output.